Diwali is just a few days away and I have not yet started the “Safai Abhiyaan” at my home. 😀 Reason??? I am too lazy to start any work but once I start then I will not take rest until n unless I finish it. Well, in short, I am waiting for the weekend so that I can ask my husband to help me in this. 😛
So, as I was saying Diwali is almost here and I don’t want to feel I am away from home :(, At least not in terms of Diwali snacks and food. 😛 During childhood apart from making rangoli, lighting diyas & Candles, my most favorite part was checking ALL THE BOXES of sweets/ snacks received from guests and then eating gulab-jamun & peda from every box and obviously the salty and spicy snacks. And as a true lover of snacks, I will make sure no tasty snack was left in the box. 😛

What comes to your mind when you think of Diwali snack? Ahhh..I know the list is too long. Same happened to me when I was thinking from where to start. I have already prepared Peda and  Gulab-Jamun. So I decided to make some salty and spicy snack. And then came my favorite Maharashtrian snack- Bhakarwadi! Sweet, salty and spicy snack. Best tea time snack too. It’s very easy to make but while rolling this you really need to master the art of rolling the dough so that the masala doesn’t come out while frying. I was finally able to do so after few attempts. 😀 All the best to you too. 🙂

Recipe:
Step 1- Take all the stuffing ingredients in a grinder jar and grind the masala to a coarse powder

Step 2- In a mixing bowl take gram flour and wheat flour. Add in the spices, oil, and salt, knead to a stiff dough and grease with oil. Cover the dough with a wet cloth and leave aside for 15mins

Step 3- Divide the dough into 2 equal parts and roll to a thick chapati and grease with oil. Further, spread the masala on the rolled dough 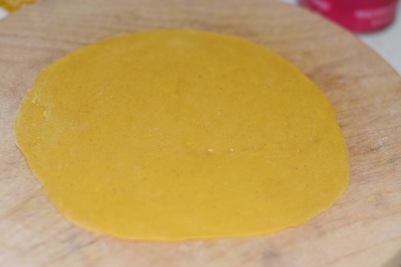 Step 4- leave the sides and spread the masala all over the rolled dough. Roll them very tightly and close from the sides. Cut them into equal portions 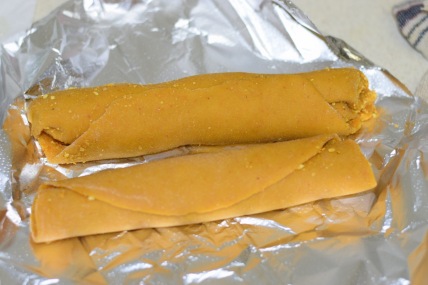 Step 5- Flatten them slightly so that the masala does not spill out while frying. Heat oil in medium flame and deep fry the rolls till they turn golden brown. Stir in between to avoid burn. Remove on a paper towel to drain the excess oil 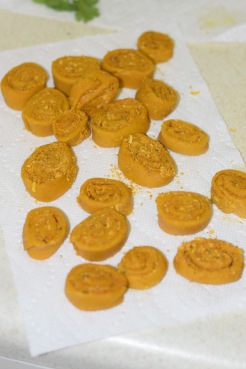 Let the roll cool down, sprinkle some chat masala and store them in an airtight container. Serve them with tea and enjoy. 🙂